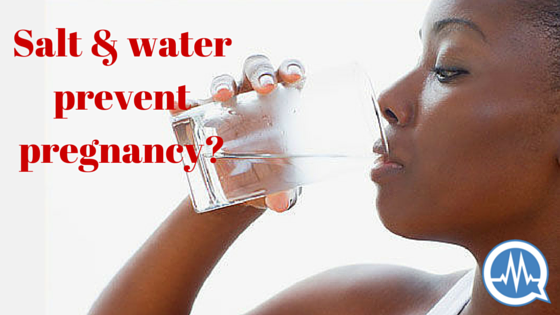 In my years of medical practice, this is one of the commonest questions I get asked by ladies, especially.

There are a lot of lies and myths out there about how to prevent pregnancy immediately after unprotected sex, like urinating immediately after sex, washing the vagina as quickly as possible, drinking heated alcohol (like whiskey), using lime (or lemon), and so on. None of these actually work!

But, one very common one ( and that many ladies believe in) is drinking salt and water solution immediately after sex.

Does it work? Does drinking salt and water prevent pregnancy?

No! Drinking salt and water immediately after sex doesn’t work, even if you use it to wash the vagina! Now, if you think it has worked for you in the past, you’re wrong…it didn’t; it wasn’t what protected you — you were most likely on your safe period — and that was why you didn’t get pregnant! You were only lucky!

But, wait!  How on earth did you think it would work?

First, neither salt nor water nor salt-solution has contraceptive properties — they don’t have ability to prevent pregnancy (on their own).

And, also, if you’re thinking of direct action, no! There’s no direct connection between the stomach and the womb! So, drinking salty and water is a wrong move! The best taking excessive salt solution can do is to make you vomit immediately — and that is useless (in preventing pregnancy) and harmful to you health!

In fact, it is a dangerous move! Because, we, medical people and nutritionists, discourage excessive salt intake and advise people to cut down the amount of salt they take.

As you might have rightly known, regularly taking this salt solutions increase the risk of hypertension and leads to poor blood pressure control (for people who already have hypertension).

But why use this fake method when there are simple and very effective ways of preventing pregnancy?

Like, you could use Emergency Contraceptives like Postinor, are very effective in preventing pregnancy if taken within 72 hours after sex — the earlier, the better. If you vomit within 3 hours of taking the tablet, take another one. It doesn’t protect for subsequent sex. It may, however, affect your next menses in timing (it may come earlier or later) or in volume (it may be heavy or scanty, or not at all!)

Read this: POSTINOR 2: HOW EFFECTIVE IS IT IN PREVENTING PREGNANCY? IS IT SAFE OR DANGEROUS?

Other methods like use of condoms, calendar method (and calculating of safe period), and withdrawal methods, if properly and correctly used, have a great level of effectiveness.

So, I repeat: Does drinking salt and water prevent pregnancy? NO!

MY GENOTYPE IS A.S. …CAN’T I RISK MARRYING ANOTHER A.S.?

IS MY OWN TYPHOID INCURABLE?

HELP! MY BODY ITCHES AFTER BATHING!

HELP! I NEED A MALE CHILD!

#AskDrMalik: IS THERE PANACEA OR MAGIC DRUG OR “ONE CURE FOR ALL DISEASES”?