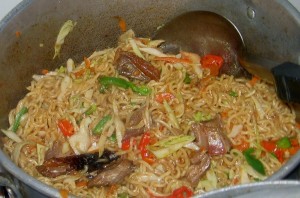 That is the unspoken question is the heart of several bachelors, students, and mothers who depend on the cheap, easy-to-prepare, and delicious meal alternative that indomie instant noodles offer.

Yes, Indomie Instant noodles is processed food and we (medical people and nutritionist) discourage processed foods, and advise people to eat more of natural foods; but I am terribly unhappy about the way people put fears in people about eating indomie noodles!

Many things are exaggerated. Several lies are told. Un-sourced and faulty scientific references are made. I see it in many Nigerian health blogs and other entertainment sites. Please, health issues are too delicate for anybody not trained and licensed to start writing and broadcasting unconfirmed health articles.

Are all these side effects true? Could Indomie be made healthy and safe to eat? Or is indomie always harmful, and bad for you and your health? Does indomie cause cancer and all these dangerous things you read online?

True, indomie may be unhealthy but it is not as harmful as people say! In this article, I will address an article I read in Nairaland forum and Naijaloaded site. I will state their own words, from their articles, in italics, (about how indomie is dangerous) and give a personal, reliable, scientific assessment of their reasons:

Lie #1: Nutrient Absorption: Noodles inhibit the absorption of nutrients for the children under 5.

Dr. Malik: Wait… how does this happen? There is no known mechanism by which noodles would inhibit the absorption of nutrients for children or adults. If at all a child becomes malnourished, it is because the necessary nutrients are not given the child, not because indomie is known to inhibit absorption. No scientific basis for this.

Lie #2: Cancer: The ingredient in the instant noodles called “Styrofoam’, is a cancer causing agent.

Dr. Malik: BIG lie! Indomie and its ingredients DOES NOT contain any such thing! Styrofoam is used in building materials, electrical insulation, road construction and automobiles. There is no Styrofoam or any wax that could cause cancer in indomie. But, wait…why do people lie, sef?

Lie #3: Miscarriage: Women who are Eating instant noodles during their pregnancy causes miscarriage, because it affect the development of a foetus.

Dr. Malik: How na?! It is not true! How does that happen? There is no known substance or chemical in indomie that affect embryogenesis or fetal development! Eating instant noodles does not cause miscarriage! Never!

Lie #4: Junk Food: instant noodles are enriched with full of carbohydrates, but no vitamins, fiber and minerals. This makes the instant noodles considered as a junk food.

Dr Malik: And so what?! What is the big deal? Why single indomie out? What makes indomie as a junk food especially more dangerous than other junk foods? And, moreover, people rarely eat indomie without “fortification and supplementation” with eggs, pepper, tomatoes, green beans, and other veggies. It could be enriched.

Dr Malik: An overstretched truth is a lie, abeg! In an effort to demonize something, you could emphasize some rare truths. Yes, indomie contains sodium but not in life-threatening amounts as they make it look! And, if someone develops heart disease, stroke, hypertension, and kidney damage, it is almost impossible to attribute indomie as the only cause! All these have strong genetic basis and collective lifestyle factors as risk factors. It is unfair to pick eating indomie as the skape goat or sole culprit!

Lie #6: MSG: Monosodium Glutamate is used to enhance the flavour of instant noodles. People who are allergic to MSG consume it as part of their diet, then they end up suffering from headaches, facial flushing, pain, burning sensations.

Lie #7: Overweight: Eating Noodles is the leading cause of obesity. Noodles contains fat and large amounts of sodium, which causes water retention in the body and surely it leads to overweight, and obesity leads to heart problems.

Dr Malik: Lie! Eating noodles is NOT the leading cause of obesity! Whoever originally wrote this obviously has very poor knowledge of science and medicine and nutrition. If indomie noodles is discouraged by medical persons and nutritionists, it is not first because it is major cause of obesity! No… this is unfounded and basically unscientific. It is an illegal connection!

Dr Malik: I have been a practicing medical doctor for years and no patients has come complaining of indigestion following eating indomie! How and why would it cause irregular bowel movements? Obviously, the writer is very ignorant of basic sciences. How is indomie bad for the digestive system? Explain!

Lie #9: Propylene Glycol: The ingredient in the instant noodles called “Propylene Glycol” which has a anti-freeze property. This ingredient is used because it prevents the noodles from drying by retaining moisture. It weakens the immune system of our body. It is easily absorbed by the body and it accumulates in the kidneys, heart and liver. It causes abnormalities and damage to those areas.

Lie #10: Metabolism: Regular consumption of instant noodles affect the body’s metabolism, because of the chemical substances like additives, coloring and preservatives inside the noodles.

Dr. Malik: We discourage processed foods because we don’t like too much consumption of additives and preservatives. This is a problem associated with ALL processed foods including soft drinks, fruit juices, candies, cakes, fast foods, and so on. Why pick indomie out? How is indomies specially different and more dangerous than all other processed foods. No way! If anything, it is less dangerous because most people end up preparing it like regular home foods.

So, please, stop saying eating indomie is dangerous! No, it is not as dangerous as people say; It is simply unhealthy and shouldn’t be eaten regularly. It should be a once-in-a-while meal; and if you can avoid it completely, fine! But, don’t act out of fear.

SEVEN SIMPLE THINGS TO DO TO THOSE PIMPLES

SICKLE CELL DISEASE: MY JOURNEY AND EXPERIENCES AS A SICKLER! [A True Life Story]

Hibiscus Tea Benefits: Why You Should Drink Zobo.