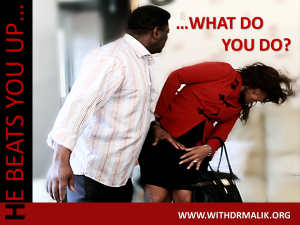 Love-relationships are wonderful gifts. The experience is beautiful! As a matter of fact, one of the best sights to see is that of couples in love—holding hands on the road, whispering into each other’s ears in the market, writing love notes on in the taxi, looking into each other’s eyes in the salon, and so on. Irrespective of the bad name given to love and marital romance today, true love is still celebrated in its purest form, especially when it is seasoned with selflessness and consistent dedication…and void of domestic violence.

What happens when instead of true love and marital romance, we have deep hurt, bitterness, broken communication, domestic violence, and so on? What happens when all a couple does is to tear down each other’s joy at the slightest mistake? What does one do when one’s partner abuses one sexually or beats one physically?

Sometime ago, I saw a video of Ray Rice, a professional NFL star, beating his wife in an elevator, to an unconscious state! He was eventually fired by his club, the Ravens, a move that set him back professionally. However, this is often not the case in every situation. Across the globe, particularly in third world countries with poor legal system—where the men are often the breadwinners of the family—MANY WOMEN ARE CONSTANTLY ABUSED AND NOTHING HAPPENS!

According to Women’s Aid, about 2 women are killed every week!

How do we handle domestic violence and wife-beating? What do you do if you male partner or husband beats you up physically or abuses you sexually?

Abuse often begins like a little drop of water. You will often see signs of abuse towards other people especially at the early stages of your relationship. At other times, these may be directed towards you in form of mean jokes, hurtful sarcasm, physical pushing, and so on. Psychologists say that ladies should speak up against such behaviors. Let him know that such behaviors CANNOT be tolerated. It is better to be single than to fall in love with a beast! Silence strengthens abuse. The power of abuse is secrecy because abusers often work hard at isolating their victims in order to mentally torment, intimidate, and oppress them. However, it is important for you to carefully select who you share your story with—speak up, but protect your privacy.

There are cases where it is necessary to leave the location temporarily until a solution is reached. I am often suspicious of any advice or intervention which insists on keeping ladies in the same environment with their abusive male partners. Encouraging a victim to remain with the abuser is suicidal! Many women have lost their lives in situations like this. Unfortunately, not every country has been able to make provision to shelter victims of abuse. But, by all means, change location, at least temporarily—till you are very, very sure there is a change! Stay alive dear!

Bitterness and lack of forgiveness is like drinking poison and hoping the other person dies! Forgiving him does not mean staying (or living) with him; it doesn’t excuse the gravity of what was done to you; but it is part of the healing process which is for your own good. It will help you take reasonable decisions. And, forgive yourself, too—don’t blame yourself! There is a tendency for you to blame yourself, feel sorry for yourself, or develop a defeatist mentality. You must not give room to this at all. As a matter of fact, rather than blame yourself, turn your pain into power. Recognize that you are a survivor, so use your story to encourage and empower other people like yourself. Forgive—him and yourself.

Talk to someone. Talk to someone you trust—it could be a family member or reliable friend. Don’t fall into the temptation of covering it up! If it gets out hand, you might have to resort to seek protection and safety with established authorities. And, most times, victims of domestic violence end up with emotional scars, low self-esteem, guilt, weight gain due to emotional eating, and so on. Please seek professional help from a traditional leader, religious leader, counselor, a therapist, or a pastor. This will go a long way.

Victor Akunna is fondly called “the Relationship Catalyst” because of his passion for helping individuals, couples, and companies build sustainable and valuable relationships with key stakeholders. He is a member of The Coaching Academy, UK with experience in relationship coaching. He and his lovely wife, Chidi, run Romance Masterclass (a coaching program), and write Connected Hearts (a leading daily devotional on spicing up marital romance), while also running Foundation for Family Affairs (a charity focused on strengthening families around the globe).