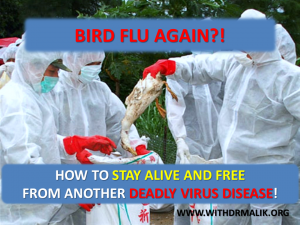 “[Bird flu] is an unusually dangerous virus for humans.”

WHAT EXACTLY IS THIS BIRD FLU?

You see, just like humans, birds too sometimes catch the flu! It is called Bird flu (scientist also call it Avian Influenza). Bird flu is caused by the Avian Influenza (AI) Virus which usually causes disease in wild water fowl such as ducks and geese, often with no apparent signs of illness in them. Sometimes these bird flu viruses spread to domestic poultry and cause serious outbreaks of disease.

Sadly, occasionally, humans contract bird flu from these birds and fowls. Good news is human-to-human transmission is very rare and it is difficult to get the disease by eating properly prepared and well-cooked meat or egg (a few cases have been linked to consumption of dishes made of raw, contaminated poultry blood).

Bad news is around 6 out of 10 people who actually get infected end up dying! Even more worrisome is the potential of the virus to change into a form that is more easily transmissible among humans!

Because bird flu is an “emerging disease”, we still have a lot more to learn about its transmission. However, it has generated an active research interest all over the world especially in the past decade.

No! The first human infection of bird flu recorded was in Hong Kong in 1997. It re-emerged in 2003-2004 and has since spread from Asia to Europe, the Americas and Africa, causing millions of poultry infections and several hundred human cases and deaths.

Mid-2013, a new type of the disease emerged in China, causing the death of 43 people.

The recent pandemic (global spread) began early this January and has so far mainly affected Taiwan, USA, Canada, Germany, Egypt, Israel, the West Bank and, as you may have known, Nigeria.

The first outbreak in Africa occurred in Nigeria in 2006 and the first human death was recorded a year later. Another less serious outbreak was reported in 2008.

HOW DOES ONE CATCH THIS DEADLY BIRD FLU?

Luckily, most bird flu viruses do not infect humans although a few can infect people and cause disease when one comes in contact with infected live or dead poultry or in contact with contaminated environments such as poultry farms or bird markets.

WHAT ARE THE SYMPTOMS OF BIRD FLU?

The symptoms of bird flu infection are not specific. Once infected, it takes 2-8 days and sometimes up to 17 days to manifest any symptoms.

They may include high fever, weakness, sore throat and muscle aches. Some people also complain of abdominal pain, chest pain and diarrhea. The infection may progress quickly to difficulty breathing [due to pneumonia (severe chest infection)], altered mental status or seizures. In many patients, the disease follows an unusually aggressive clinical course, with rapid deterioration and high death rate.

CAN BIRD FLU BE TREATED?

Yes! But, it is not affective as treating other illness like malaria and diarrhea!

Bird flu requires prompt attention in a hospital intensive care unit if available. Special antiviral medicines can reduce the severity of illness and are recommended to be used in all cases.

Research is still ongoing for vaccines to prevent H5N1 with some success achieved, but they are not ready for widespread use.

HOW CAN I PREVENT BIRD FLU INFECTION?

As generally advocated, good personal hygiene and commonsense are essential preventive tools.
People who work on poultry farms or live bird markets or those who come in regular contact with birds through slaughtering, feather removal, or handling “dead bodies” of infected poultry are particularly at risk.

If the above is in your job description, you should:

#1: Protect your eyes, nose, mouth and hands from direct contact with virus particles from the birds using protective wears such as gowns, face masks, gloves, boots; these are the most common passageways for bird flu virus to enter the body.

#2: Disinfect protective clothing and footwear after each use.  Bird flu virus particles may be transferred through clothing or shoes

#3: Regularly use a hand sanitizer in order to further reduce the chances of cross-contamination to other humans

#4: Report incidences of sick or dead birds suspected to be due to bird flu to appropriate authorities (e.g. Nigerian Avian Influenza Task Force). Controlling the disease in infected birds decreases chances of transmission to humans.

If you do not much to do with birds (except on a plate!), still you should:

#1: Avoid contact with live birds especially poultry, ducks and geese particularly if you have a cold or are young or elderly

#3: Regularly wash your hands and use hand sanitizer

Following these precautions reduce the chances of contracting bird flu even among high risk groups such as farmers.

2. WHO: Avian Influenza in Humans.