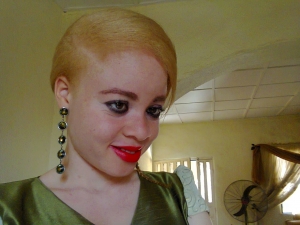 Being an albino, to some people, is a curse; to others, a limitation; and yet, to others, a strange occurrence. Scientists, too, see it as a genetic condition of the skin lacking its usual colouration. In spite of all the above, personally, I choose to see albinism as a shade of complexion—just as there are other shades of the skin!

Growing up, I had to come to terms with the fact that I looked different from the people around me, and go through the struggle of being treated as such, usually negatively. In school, I had to struggle with victimisation from some teachers, as well as some classmates. I got used to taunts from people I hardly knew, probably while walking along the road. I became very shy and began to struggle with low self-esteem and inferiority complex. This continued well into my teenage years. Through all of these, my parents were my greatest encouragers. At a point in my teenage years, my Sunday school teacher also joined the list of those that encouraged me.

However, the greatest encouragement came from one person—myself! I gradually began to slip out of self-pity. For anyone with any kind of low self-esteem  the major thing is self-acceptance. I acknowledged my uniqueness and began to live with it.

I did several researches on the things I needed to know and how to live in the best health I could. I realised that the major ‘’enemy’’ of the albino is the ultra-violet rays which come, mainly, from the sun (but could also come from halogen lamps and fluorescent lights). I also got to understand how the sun could affect my eye, the use of recommended eye-glasses, and so on.

A myth has it that albinos should not consume salt because it would cause freckles—black spots to the skin! It’s not true! However, the truth is that the sun rays damage the skin since it has no pigmentation (which offers protection). This damage causes the skin to redden and start bringing out freckles after a while. Long-term exposure to  the Sun rays make the skin more liable to skin cancer.

On a final note, every albino should get to the place of self acceptance and live like every other human being but being mindful of their ‘’enemy’’- the UV rays of the Sun. You enemies aren’t those that mock and scorn; those ones are, in reality, harmless! Also know that there is nothing seriously wrong with your eyes. You see the way others do—in the afternoon and night—a little differently, though—and you eat what others eat.

Be confident of yourself because you are not less of a human being than anyone else; after all, nobody chooses their skin complexion—just as you didn’t choose yours.

HOW DO I REMOVE ALL THESE STRETCH MARKS PERMANENTLY?

10 NATURAL PRODUCTS AND SIMPLE PROCEDURES FOR A HEALTHY FLAWLESS SKIN