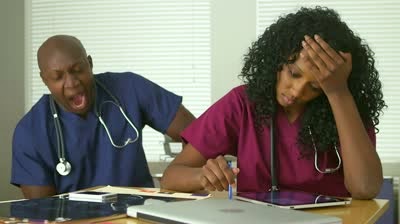 #1: Doctors are flirts.
[They are actually referring to male doctors]. I always thought this is a guys’ problem, and not just male doctors’ problem. But, trust me, not all doctors are promiscuous — there are some virgin bachelors and faithful husbands among them! Maybe, the profession attracts ladies; maybe the doctor’s familiarity with the female body removes every sacredness; maybe stress increases their libido… I don’t know why; but, there seem to be some truth in this common rumor!
#2: Doctors are rich.
Really? I feel they are “just comfortable.” True, they might be earning more than most of their mates in other professions, yet the richest people of the society are not doctors. And, you see, unlike others, doctors have several demanding eyes on their pay, and maybe, many mouths to feed. Most rich doctors are rich only because of other (additional) sources of income and financial education.
#3: Doctors are always very busy.
They say doctors are usually too busy to have time for their families and friends. Yes, medical practice is a busy and demanding career, but, still, we have doctors with warm families and tight circles of friends. It’s all about time management– you create time for whatever is important to you. I am in full medical practice yet have time to call home regularly, visit and chat with friends, write blog-posts and books, do music, organise seminars and concerts,…and love little cute babies!
#4: Doctors are always employed.
But doctors also search for jobs. While it might not be as difficult as it is for other professions, a doctor may sometimes be caught in the stressful cycle of submitting applications, attending interviews, and not being offered a place for work! Doctors could go for several months looking for a place for houseman-ship or for residency. The killing of health workers in some parts of Nigeria scares doctors, thereby reducing the number of places they would want to work. They may be unemployed for a while, but as I said, it is not as bad as with other professions.
#5: Doctors have poor social lives.
Anyways, this might no longer be very true. The rigors of medical schools might have restricted us to a conservative lifestyle, but not all of us. Some doctors attend parties, follow trends in cars and fashion, love football, keep friends, and socialize like every other person. And with the proliferation of online social media and smart-phones, more doctors are loosening up and “belonging”. Now, we got some doctors with swag — but, not in the theatre o!
#6: Doctors know everything about the body.
It might seem so, but it is not exactly true. The human body is very complex and each body is unique and different, hence the number of years and efforts invested during  medical school in order to learn about them. When all is said and done, doctors acquire a vast well of knowledge. But information changes and new discoveries are made: we can’t know ALL; at best, we can know A LOT. Because of this, we have doctors specialize in certain aspects of the body, so one could refer patients to them when it gets beyond one’s knowledge and skills. Doctors don’t know everything!
#7: Doctors practice what they tell you.
Funny enough, it is not true with every doctor! You know, it is easier to say a thing than to do it. Some doctors don’t practice what they profess: they rarely have medical check-up for themselves; they have multiple sexual partners; addicted to drugs and alcohol, and are chain smokers; they eat junks, rarely exercise, and have little time for sleep. So, you see, we, sometimes, show people the way to health without taking it.
#8: Doctors don’t fall sick
Some people wonder why, being a doctor, you fall sick! Knowledge of diseases and how to prevent them is an added advantage to doctors, but, of course, still, they fall sick…and die like every other person! In fact, being in contact with sick people exposes doctors to diseases in ways other people are not. A Fulani man, speaking in Hausa, once said, “doctors can’t fall sick; they only choose to”! I went away wondering why on Earth would I ever choose to be sick!

FIRE YOUR DOCTOR: PROTECT YOURSELF AND YOUR FAMILY FROM DANGEROUS HEALTH WORKERS!