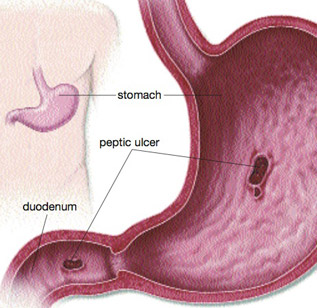 If you experience pain…

… it may not be exactly as I described, but, you most likely have what we call Peptic Ulcer Disease (PUD), and what you call “ulcer“!

This is a simple version of the story:

The stomach normally produces acid to digest what we eat. Therefore, the stomach has a mucous, protective lining. When there’s increase in acid production and/or decrease in the mucus (and other protective measures), the acids “eats up” portions of the esophagus, stomach, or intestine, creating “wounds” on the inside. This wound causes pain. You can guess what happens when the acid touches these “raw” parts!
I think that’s all you need to know, for now!

But, What causes these imbalance between the acids and the “protection”?

No! Pepper and spicy foods don’t cause “ulcer”!
There’s a harmful bacteria in the stomach called H. Pylori [we know a little about how it gets there; some say through food and water, others say, also, even through kissing!] that does a lot to lead to increase in acid and form “ulcers”
Also, long use of some pain-killers called NSAIDS, especially at high doses, could cause “ulcer”. NSAIDS are drugs like Aspirin, Ibuprofen, Diclofenac, Piroxicam, etc. If you take them occasionally, e.g. for menstrual pain, make sure you take them after eating. Note: Paracetamol (and Panadol) is not in the list — it doesn’t cause “ulcer.”
You are at a higher risk of getting “ulcer” if you:

NOTE: The pain you feel is a “warning” sign. Even though the “wound” may heal, and the pain will go, and all will become normal again, sometimes things may go haywire! It may become serious with: vomiting blood; bloody stool; black (like, coal-tar), foul-smelling stool; fainting; pain and difficulty in swallowing; weight loss, and other stuffs I don’t want to talk about!

No! Milk does not cure “ulcer”! It will make you feel better for some time,… and then, increase acid production! Instead:

Finally, follow the doctor’s prescriptions carefully… and that for you, my brother, my sister, may be the end of the story, forever and ever!